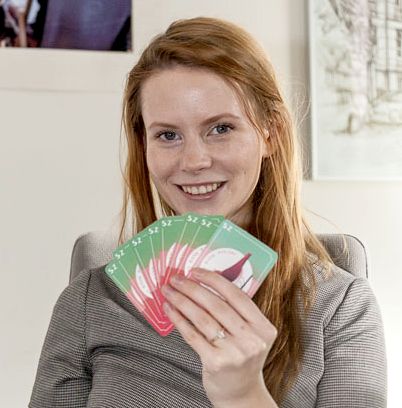 Aleksandra Stefaniak, MD, is currently completing her Ph.D. in clinical dermatology at the Department of Dermatology, Venereology, and Allergology at the Medical University in Wroclaw with a focus on pruritis and psychodermatology. Her research interests are highly interdisciplinary and are situated at the intersection of clinical research and technology. She is interested in exploring and finding new ways of promoting public health. In 2019 she founded a board game anti-vaccers.biz with her husband, Jakub Stefaniak to fight with myths and conspiracy theories spread by the anti-vaccination movement.

Satirical tabletop game anti-vaxxers.biz was designed to trick players to become aware of the value of vaccinations. Players can expect ironical humour and fun playing the game with friends, which shows the consequences and realities of the businessmen activities in gaining unlimited profits from alternative medicine.

Players try to gain influence at all costs by selling useless goods in their online stores. They also collect signatures and lobby for harmful laws. Their actions affect the population resistance index and – over time – cases of various diseases become more dangerous. This may harm the anti-vaxxers themselves… unless they are smart enough to vaccinate on time.

The idea was given the patronage of the Wroclaw Medical University and Medical Chamber in Wroclaw. A crowdfunding campaign started in March, when the pre-sale of the game was conducted. The game was funded by supporters in only 14 minutes. After 45 days of pre-sale more than 1600 copies of the game were purchased and there has been raised 1348% of the initial financial goal.