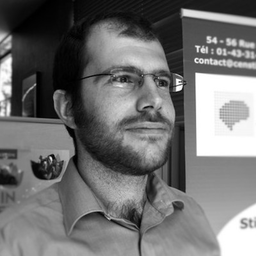 His current research work focuses on three main areas: social robotics for people with dementia, virtual reality tools for people with hoarding disorders, andinnovative awareness raising campaigns on assistive technologies for elderly people and/or people with disabilities. He is also the creator of MINDs (formerly MINWii), a music therapy game co-designed with patients, geriatricians and occupational therapists that has been shown to provide a 28% reduction in behavioral disorders inpeople with moderate dementia.

Hoarding disorder is characterized by persistent difficulties discarding possessions, excessive acquisitions, resulting in significant clutter that obstructs the individual’s living environment and produces considerable functional impairment. It remains largely under-reported, but estimates range from 3 to 6% of the population affected in developed countries, about 20 to 40 million people in Europe.

This behavior may pose significant risks for patients and their neighbors (increased risks of disease, fires, collapse of buildings etc.). Thus, authorities must impose emergency, forced de-cluttering to prevent catastrophes. These operations are extremely traumatic for patients and often lead to relapse, depression and suicide attempts.

This patients generally shows poor treatment response in both pharmacotherapy and cognitive-behavioral therapy (CBT). Lack of compliance with CBT exercises in fact predicts a weak treatment response in hoarding disorder. Virtual Diogenes seeks to treat hoarding disorder using virtual reality (VR), which would be more effective than classical therapy and thus enable therapists to work with patients in their “own” virtual apartments. We report on the iterative co-design, implementation and testing of our VR tool with patients and a multidisciplinary team of experts (psychiatrists, psychologists, anthropologists and engineers).

This tool enables patients to recreate parts of their cluttered homes in VR using an interface akin to that of “The Sims” and then plunge into it in VR to practice discarding objects with the help of a therapist. This posed several challenges in terms of design (i.e. choice of features to maximize therapeutic efficacy without making the tool too complex and costly), usability (for patients and therapists), acceptability, CBT protocol design and implementation, for which we explain our solutions. We then discuss ongoing research, including clinical studies and exploration of other uses for the VR tool such as primary and secondary prevention.