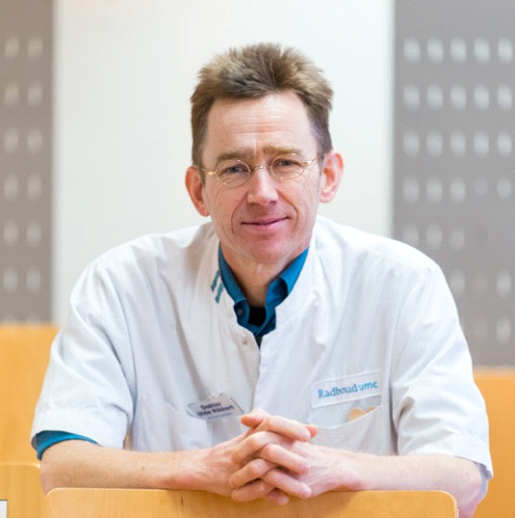 Prof. dr. Marcel Olde Rikkert (1962) currently is Head of the Dept Geriatrics (2002 -….) and Director of the Radboudumc Alzheimer Centre (2003-….) at the Radboud University Medical Center, Nijmegen, The Netherlands. He is Principal Investigator at the Nijmegen Institute of Medical Neurosciences, Donders Institute (2008-..), Principal Lecturer at Radboudumc (2009-..), and Principal Clinician of the Radboudumc (2013-…). His research group is currently focussing on complexity science, resilience in aging and dementia, and on evaluating (cost-)effectiveness of complex interventions in seniors, specifically patients suffering from cognitive decline and dementia.

As Principal Investigator his research has reached international esteem for being able to carry out high quality complex interventions in frail seniors, especially in persons suffering from dementia, leading to added value for patients and society. As such his group has successfully initiated new and original interventions and conducted randomized trials on these patients, for example by being the first to introduce occupational therapy (OT) in dementia to improve the performance of daily activities, which is now spread internationally (with trials and guidelines in Germany, Italy, Australia and the UK). In 2013 he joined the complex systems network, founded by Spinoza Prize winner Marten Scheffer, and in 2018 he became external faculty of the IAS, Amsterdam, and recently was invited at the Santa Fe Complexity Science Institute to organize a ‘resilience on aging’ workshop at the Santa Fe Institute of Complexity Science.

Olde Rikkert is an influential scientist, which is illustrated by the rapidly growing citation impact of his work (about 1,500 citations in 2018; excluding self-citations in Web of Science; WoS). In total, he has published over 500 scientific papers that have been cited 11,678 times (76% last 5 yrs). In the last 10 years, he has published 325 articles times yielding an H-index of 41/50 (WoS/G Scholar), 35% of his papers are in the top 10% of his research field, which altogether places him in the top 5% percent most influential scientists in Geriatrics.

Apart from this he plays with his dog Ticho, writes columns, loves his three children and wife, and cares for his parents (1920/1923), whom he also tries to coach in staying playfully on the move.